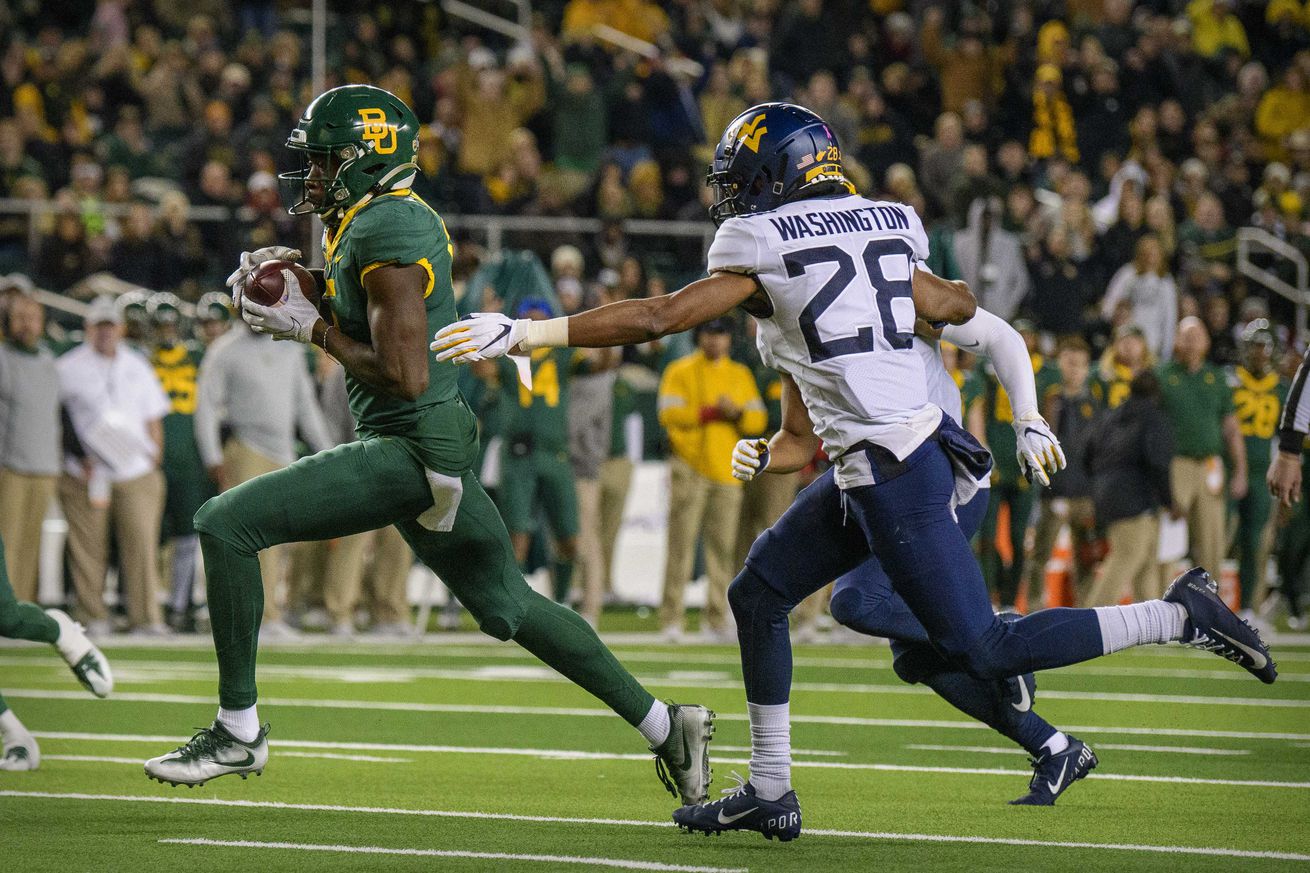 Only six of the 10 teams in the Big 12 were in action in Week 10. After a crazy Week 9 with upsets galore, Week 10 was relatively uneventful. The only game that raised any eyebrows was a Thursday night Baylor-West Virginia game.

OU had a bye last week to regroup and prepare for the stretch run of the season. The Sooners came in at No. 9 in the first College Football Playoff rankings. OU will need both Oregon and Utah to lose a second game to keep the Pac-12 out of the playoff and will also need one of Alabama and LSU to lose two games by the end of the season. The Sooners really need some help to make it in to the top four.

Aside from needing help from other teams, OU has to win out in impressive fashion. That starts with a home game against Iowa State this weekend. ISU is coming off a disappointing home loss two weeks ago and a bye week last week much like OU. It won’t be easy, but the Sooners need to win by a few scores.

Baylor survived a scare from West Virginia on Halloween with a 17-14 win. The Baylor defense came to play, giving up just 14 points despite the offense not being able to keep them off the field. Baylor punted seven times, and Charlie Brewer completed 20-of-26 passes for 277 yards and two touchdowns. Denzel Mims caught one touchdown and had 99 receiving yards. Baylor rushed for 176 yards as a team but averaged just over three yards per carry.

Baylor will head up to Fort Worth for a rivalry game with TCU. The Horned Frogs are a bit thin at quarterback right now. Alex Delton has left the team and starter Max Duggan was injured at the end of the OSU game last weekend.

Prediction: Baylor wins a close one.

K-State checks in at No. 16 in the first CFP rankings after a 38-10 win at Kansas. The Jayhawks had some momentum, coming off a Big 12 win at home against Texas Tech. KU sold out its first home game since 2009 but the Jayhawks sent fans home disappointed.

Skylar Thompson didn’t do much in the passing attack, completing 9-of-16 attempts for 129 yards. Thompson did most of his damage on the ground, rushing for 127 yards and three touchdowns.

K-State will have more of a test this weekend against Texas in Austin. The Longhorns will be hungry for a win after an embarrassing loss at TCU. Most of the injuries for the Horns are in the secondary, so K-State may try to throw the ball more than normal in this one.

Prediction: Texas wins a close one.

OSU defeated TCU at home 34-27, the same score it beat Iowa State by the week before. The Cowboys have new life after back-to-back losses against Texas Tech and Baylor.

The Cowboys have a bye week this weekend to prepare for its stretch run. OSU closes out the season with two very winnable games against KU and at WVU before it hosts Bedlam.

Texas had a bye week after a bad loss at TCU. The Horns needed the bye week to regroup and get healthy.

Texas hosts K-State at home and a convincing win could vault them into the CFP top-25. Sam Ehlinger needs to take care of the ball and Texas needs to rediscover its run game. The majority of the Horns injuries have been in the secondary, and K-State runs the ball much more than they pass, so that could play into the Texas game plan.

Prediction: Texas wins a close one.

Just like Texas and OU, the Cyclones are coming off a disappointing loss and a bye week. ISU travels to Norman to take on a hungry OU squad.

Brock Purdy will have to take care of the ball and freshman Breece Hall will need to have a big game. The Cyclones’ offense needs to fire on all cylinders against an OU defense out to prove they are better than what they showed against K-State.

TCU couldn’t pull off a come-from-behind win at OSU. The Horned Frogs fell behind early but tied the game by halftime, but couldn’t capitalize on the momentum.

Duggan passed for 258 yards and a touchdown, but threw three interceptions prior to his injury. He was TCU’s leading rusher with 86 yards and a score as the Cowboys kept Sewo Oloniliua and Darius Anderson in check for the most part. Jalen Reagor, however, had 128 receiving yards.

TCU needs a win against a good Baylor team this weekend at home. The Bears will be motivated to head into their home game the following week with Oklahoma with an undefeated record.

The Mountaineers were never out of the game against Baylor, but the offense isn’t quite dynamic enough to pull off an upset in a close game with a good team.

Austin Kendall passed for 205 yards and a touchdown to go with an interception. The running game continues to be non-existent as the team had just 14 yards on the ground. The offense was bad all around for WVU as the Mountaineers dropped a frustrating 17-14 game.

WVU hosts another one conference win team in Texas Tech. This game is crucial for both sides to get bowl eligible. Each team has only three wins and the loser will have to win out in order to make a bowl game.

KU finally sold out a home game! The bad news is the Jayhawks were blown out by rival K-State 38-10. When Carter Stanley is on, Kansas has a shot to win games, but when he’s not it’s not pretty.

Stanley was not on against K-State. He only passed for 115 yards and threw two interceptions. The only KU touchdown was scored by backup quarterback Manny Miles late in the game.

KU, who has a bye this weekend, would have to win out to make a bowl game but that won’t happen. The Jayhawks travel south to Stillwater to take on OSU in two weeks.

Texas Tech had a bye week last week to prepare for WVU. It’s been a tough season for Texas Tech, but the Red Raiders should be able to outscore WVU this weekend. The Mountaineer offense has been atrocious, while the Texas Tech offense has at least shown flashes of potential.

The Sooners and Bears will play in primetime a week from Saturday in Waco. OU needs to get past ISU this weekend and Baylor has a road test at TCU, but this is setting up to be a Big 12 Championship Game preview.

Offensive Player of the Year:

It’s been Hurts and it will be Hurts. He had a bye week last weekend but his numbers this season have been ridiculous. Hubbard is Hurts’ only competition, but the only way Hubbard could steal this award would be with another massive performance in a Bedlam win for the Cowboys.

Defensive Player of the Year:

Big 12 Newcomer of the Year:

Duggan didn’t have his best game against OSU, but he was still impressive and kept TCU in the game to the end.

Big 12 Freshman of the Year:

ISU needs Hall to have a big game this weekend at OU.

Coach of the Year:

Baylor isn’t a secret anymore. It will be Rhule’s job to keep his team focused as Baylor has a pretty big target on its back now.

Breakout Player of the Year:

Canada’s Cowboy rushed for 223 yards against TCU. Hubbard has been special this season and deserves an invite to New York as a Heisman finalist.