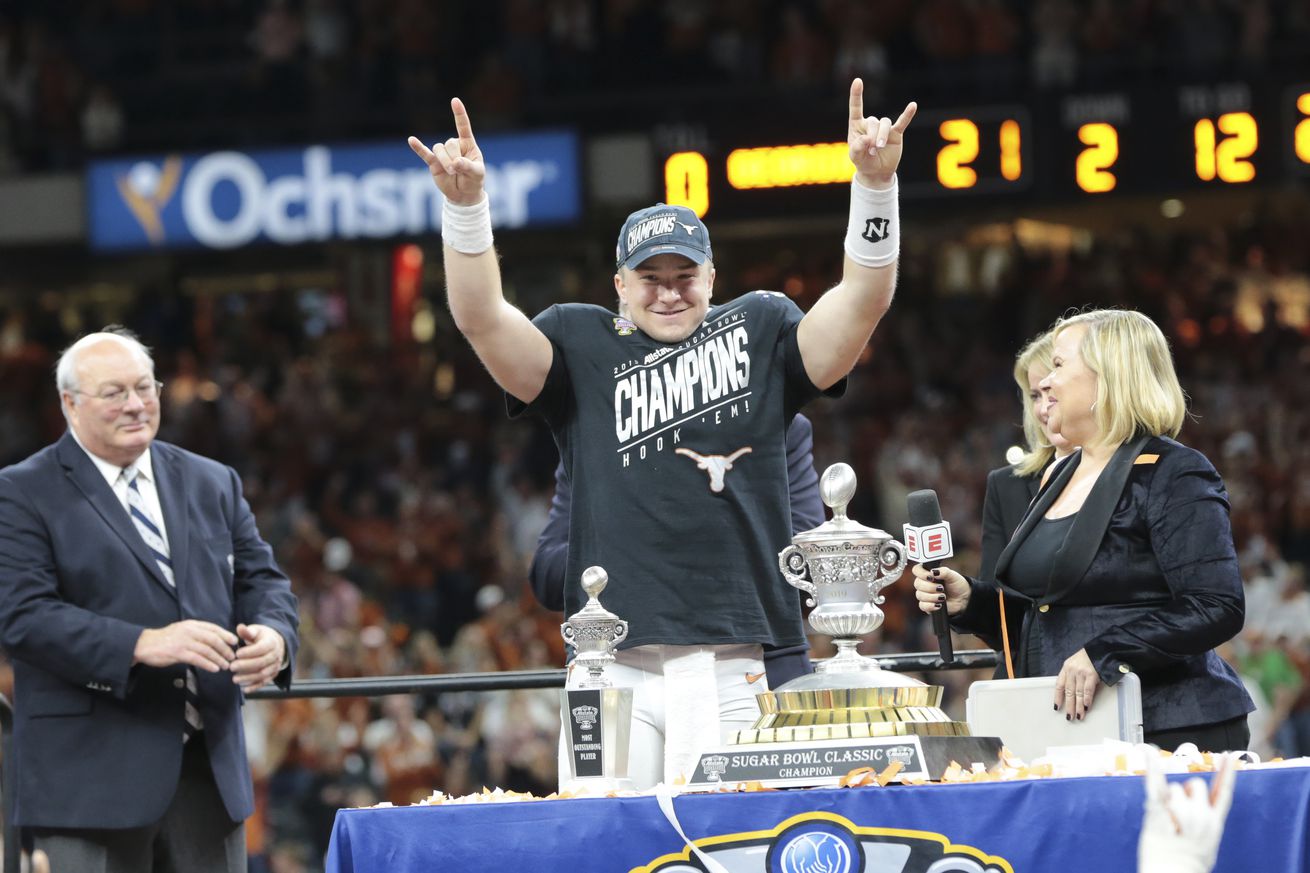 Photo by Bobby McDuffie/Icon Sportswire via Getty Images
We love our Oklahoma State news, but there is plenty of intrigue involving other Big 12 programs.

While the QB battle in Stillwater has most of us occupied, almost every program in the Big 12 has some fairly significant storylines. I’ll touch on them in my own order of importance which of course is perfect and cannot be argued with.

Every season we go down this path and almost every season we laugh this off, especially AFTER Oklahoma State beats the Longhorns AGAIN. However, 2018 showed some signs of actual changes in Austin. Tom Herman coaxed his squad to a victory over the Sooners in the regular season and pushed OU again but eventually succumbed in the most ridiculous, meaningless, stupid game ever scheduled Big 12 championship game.

Why is this my #1 non-OSU storyline? Since 2011, the Cowboys have arguably been the most consistent challenger to the Sooner’s Kansas basketball-like stranglehold on the Big 12 football title thanks to Gundy’s ability to manufacture a top 20 football program out of 2-3 star high school talent. Texas on the other hand has a glut of 4-5 star talent at their beck and call EVERY season and has done nothing but underachieve since the departure of Colt McCoy.

Why might this be “the” season for the resurrection? Sam Ehlinger.

Calm down, I’m not about to campaign for his Heisman, but I don’t think it’s a leap to say that Ehlinger is a pretty good Division I college QB. Can he “carry” the team with his arm? I’m not on that bandwagon, but he can clearly lead the offense going into his third season and there is always going to be plenty of talent around him. If Hermann can get them to play like an overachiever, this plus the next storyline could see a brief, possibly semi-permanent change in the power structure at the top of the Big 12.

The only potential problem for Texas? This…

THE most fascinating transfer story of the season in college football in my amateur opinion.

Riley has quickly cemented his reputation not only as possibly the best offensive mind in college football, but also a first rate QB coach who is working with his third consecutive transfer QB, two of which are now in the NFL. The first was a small, elusive guy with a really good arm. The second was a really small human joystick with a really good arm. The third is an elusive guy living in the body of an NFL running back (6-2, 225). It took a while for Hurts to nail down the starter’s spot, but if Riley manages to coach even moderately decent passing numbers out of Hurts’ arm then the storyline here shifts to Alex Grinch’s ability to deliver even a little defense to Norman (and that really is another storyline all to itself but I’m not about to give OU two storylines).

Speaking of overachieving, this was a story that was anticipated when Campbell took over in Ames and is pretty simple at this point.

With the departure of Montgomery and Butler, if Campbell is able to maintain the upward trend of Iowa State football this WILL be his last season in the Big 12.

If you can’t beat them, join them? The Wildcats made about as good and intriguing a hire as possible following the retirement of the ONLY coach to have success in Manhattan. Chris Klieman knows how to win FCS championships at North Dakota State, but can he find that success in Division I? This is secretly my favorite non-OSU storyline, and I’m rooting for the guy.

5. Can Les Miles initiate an “OSU” turnaround at Kansas?

This could be the most fun or disastrous (or both) non-OSU storyline for 2019.

We all know what happened when Miles took over at Oklahoma State in 2000, but does Kansas have a “Mike Gundy” to take over if Les can turn things around? Whatever that looks like, I know I will be watching for something “different” on the field if he really has a handle on making a change in the Jayhawk football culture. Miles has already had a little “player discipline” controversy to kick things off.

I would argue this has been TCU’s shortcoming since joining the league. Andy Dalton was Patterson’s last legit Big 12 style QB, so until he can locate someone that can toss it around with the other kids on the playground it will be defense and a continuation of second tier status in the conference.

The Red Bull Express and Will Grier left town and an OU QB graduate transfer moved in. Need I say more?

In replacing Dana Holgorsen the Mountaineers brought in a guy I had to look up while writing this post. Neal Brown recently named former Sooner Austin Kendall the starting QB, so this should be a fascinating storyline to another “whatever” Big 12 season for West Virginia.

The Big 12’s heartthrob somehow parlayed his firing into a head coaching gig in the NFL.

The Red Raiders’ response was a good although not “splashy” hire of Utah State HC Matt Wells. There is NOT great news emanating from fall camp in Lubbock, so this could be a VERY rough first year for the 2013 and 2018 Mountain West Coach of the Year.

If the Bears can finish last in the Big 12 I will personally fund a statue of Les Miles in Waco. If you anticipated me being interested in anything else related to Baylor football you came to the wrong place.