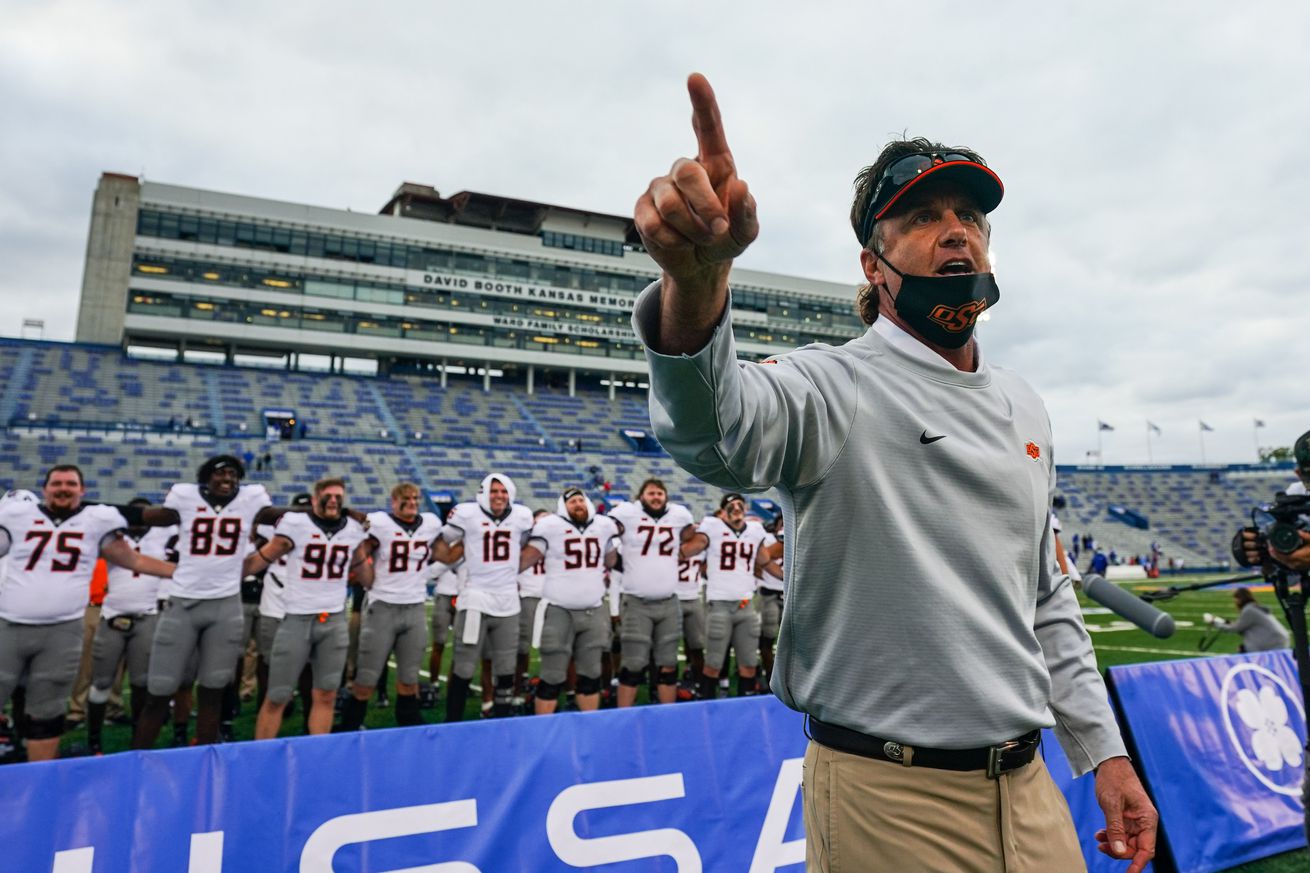 Jay Biggerstaff-USA TODAY Sports
The Big 12 has a full slate of games and the Big 10 returns to play. Check out our week eight staff picks.

Week eight is here and so is Big 10 football! We’ll get our first look at Ohio State and Penn State. Even more important, the Big 12 has a full slate of games and that includes Oklahoma State returning to play with a top-25 tilt with No. 17 Iowa State at home. Here’s who the CRFF Staff has in the games this weekend.

This might be the most challenging game Oklahoma State has left on the schedule. I am still convinced a road game at Oklahoma will be tough for the Cowboys but Iowa State will likely be one of a few teams competing for a spot in the Big 12 Championship Game.

The Cyclones lost a home game to Louisiana Lafayette to open the season but Iowa State has rebounded nicely in Big 12 play. Iowa State defeated TCU by three on the road to open Big 12 play before home wins over Oklahoma by seven and Texas Tech by 16.

Oklahoma State hasn’t played in two weeks and will get starting quarterback Spencer Sanders back from injury this weekend. The Cowboys are undefeated on the season and have wins over West Virginia and Kansas in Big 12 play. Shane Illingworth looked good in relief of Sanders but Oklahoma State has had a relatively easy schedule to this point. The semesters first test is this weekend against the Cyclones.

Not all of our staff members have the Cowboys in this one! Phillip Slavin is taking the Cyclones. Everyone else has Oklahoma State over Iowa State in this battle of ranked opponents. Robert Whetsell has Iowa State covering the spread. I have Oklahoma State winning by more than field goal, and so does Micah Allen, though I do think this game will be decided by a touchdown.

Oklahoma rebounded from a rough start to Big 12 play with an overtime win over Texas in the Red River Rivalry. The Sooners are coming off a bye week and should be ready to take on TCU in Fort Worth. TCU’s last outing was a road loss against Kansas State 21-14. The Horned Frogs dropped to 1-2 on the season with the lone win coming against Texas. Both teams have a 1-2 record in conference play and could use a win tonight.

TCU’s loss to Iowa State at home to open the season came with Matthew Downing at quarterback. Max Duggan has started the last two games for the Horned Frogs and TCU has looked better with Duggan at quarterback. Oklahoma has struggled to hold on to a lead in the 4th quarter in each Big 12 game this season with freshman Spencer Rattler at quarterback. Oklahoma might be the more talented team but Duggan is the more experienced quarterback. I wouldn’t be surprised to see this game go either way and it should be a great one.

I am taking TCU in a close one and so is Robert. The rest of the staff is going with Oklahoma to beat TCU in Fort Worth. I have TCU by a field goal and another late OU meltdown to give the Horned Frogs the win.

Our entire staff is going with Kansas State over Kansas. The Jayhawks have been competitive against the Wildcats in the last few meetings in Manhattan but that likely won’t be the case when Kansas takes on Kansas State at 11 a.m.

Baylor was supposed to take on Oklahoma State last weekend but had to postpone the game due to COVID-19 reasons. The Bears last game was in West Virginia in a close loss to the Mountaineers. Baylor is 1-1 on the season with a win over Kansas but the West Virginia game exposed real issues on the offensive side of the football for the Bears. Baylor scored just 21 points against West Virginia and it didn’t seem as if the coaching staff trusted Charlie Brewer enough to let him push the ball down the field.

Texas has plenty of issues of its own. The Longhorns lost to Oklahoma in overtime after Sam Ehlinger almost led the Horns to a come-from-behind win. The Texas defense has looked terrible over the last few weeks, negating the high-scoring offense. This game will likely depend on the Baylor offense trying to keep up with the Texas offense. That won’t happen if the Baylor coaching staff doesn’t let Brewer sling the ball around more.

Our staff has Texas in this one. The Baylor offense looked anemic against West Virginia and that will not get the job done against Ehlinger and the Longhorns. Unless the Baylor offense improves significantly from its last showing, Texas should win this one by a few touchdowns.

West Virginia will look to improve to 3-1 in conference play with a win over a floundering Texas Tech squad. The Mountaineers picked up a win over Kansas last weekend and is on a two game winning streak following a road loss against Oklahoma State. Quarterback Jarret Doege has looked better as the season has gone on and West Virginia should pick up a road win this weekend.

Texas Tech has benched starting quarterback Alan Bowman for transfer Henry Colombi. Bowman had been struggling and Texas Tech coach Matt Wells is familiar with Colombi as the two were together at Utah State before Colombi transferred to Texas Tech to play for Wells. The Red Raiders are 1-3 with the only win being a 35-33 nail-biter against Houston Baptist. Texas Tech lost a shootout to Texas at home before dropping back-to-back road games at Kansas State and Iowa State.

Phillip and Matt have Texas Tech picking up its first Big 12 win of the season. I am rocking with the rest of the staff in picking West Virginia to win on the road. I think the West Virginia defense will overwhelm Colombi and the Red Raider offense for a close win.

I mentioned that we’ll get our first look at Ohio State and Penn State this weekend. Ohio State opens at home against Nebraska. The Cornhuskers played Ohio State close the last time the two teams met in Columbus but the same won’t be true this weekend. Penn State opens with Indiana on the road. That game could be close as we get our first look at a Penn State defense ravaged by graduation. Cincinnati plays at SMU this weekend in a game that could decide which team ends up being the top Group of Five team. Michigan plays at Minnesota in a ranked matchup of Big 10 teams in the primetime slot. Let’s take a look at our staff picks from games around the nation.