CRFF - Four Quarters: LD Brown, Sanders’ turnovers, and the state of the program 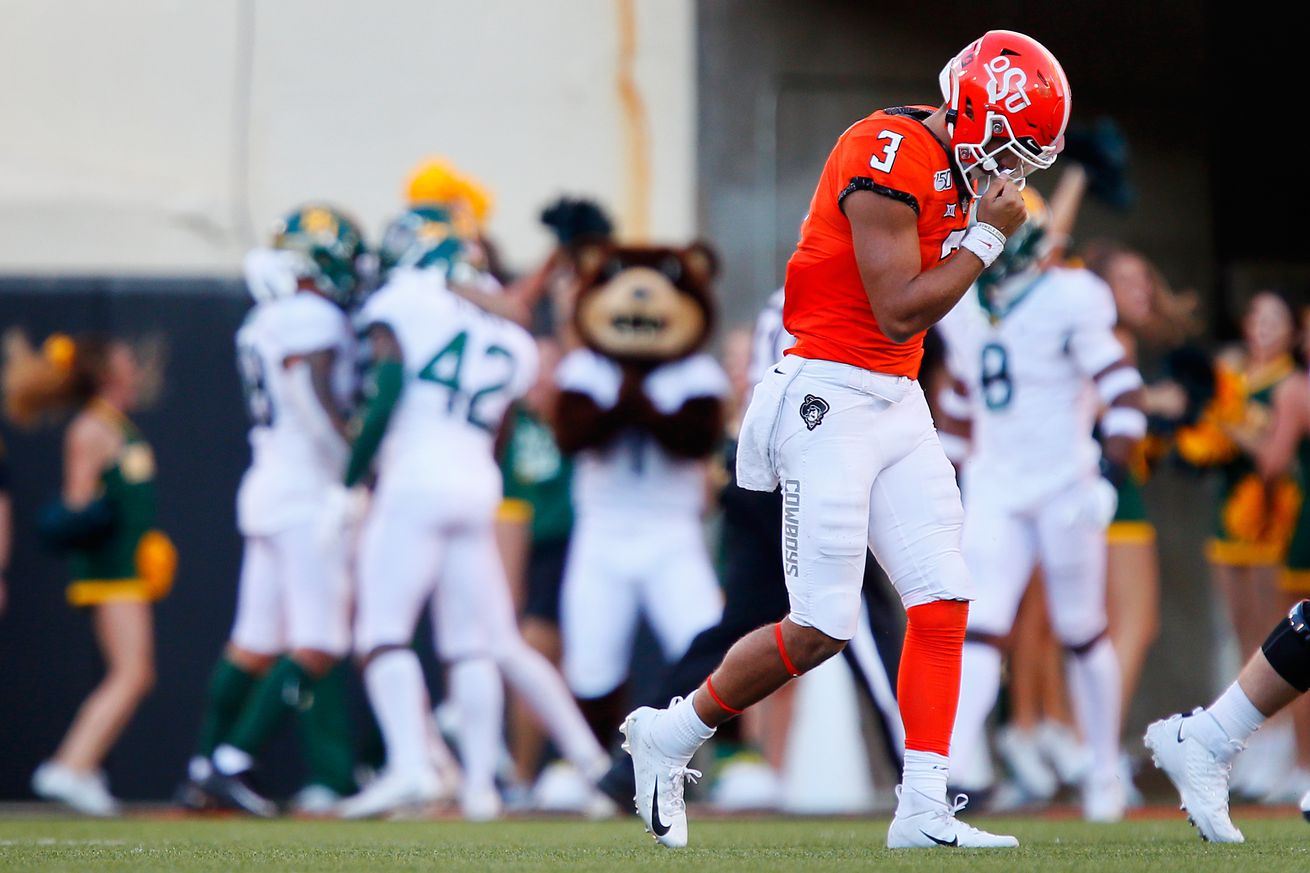 First Quarter: We Have a Back-Up


Let’s start with something positive, because it’s only going to get worse from here.

LD Brown has been found! He finally played well in a game.

Brown had 79 yards on four carries, including a 68-yarder he took to the house.

Oklahoma State has been desperate for a back-up running back to give Chuba a rest. Until Saturday, they’d been running Brown out there, but he was almost more a liability than an asset. My hope moving forward is that what he did on Saturday will become the norm and not the outlier. To keep Chuba healthy through the end of the season, they’re going to need Brown to play like he did against Baylor, and do so with a slightly heavier workload.

Second Quarter: Saturday wasn’t great, but the defense has been doing its job


When Jim Knowles was hired last year, the thing we said was this; his style of defense is incredibly aggressive. That means sacks and TFLs. It also means you’re going to give up a big play here or there.

We all tried to calm fans down last year when the defense gave up a big play because it meant the offense would get the ball back, which was a good thing.

So far this season, Knowles had dialed back the aggressiveness as far as going after the quarterback, because the strength of the defense wasn’t up front, it was in the secondary.

On Saturday, Knowles decided to dial it up, and it had the desired effect; four sacks and nine TFLs. It also had the downside. A lot.

And that’s the problem. We knew it was going to take three years to get the roster where it needed to be to properly run this defense. We knew it would take time to get everyone where they could run it without thinking.

Yeah, the defense wasn’t great on Saturday, but it’s not really a defense designed to hold teams to 14 points. It’s not a defense that really wants to give up long scoring drives. It’s a defense that wants to get off the field quickly.

But Oklahoma State’s offense continues to put them in difficult positions. They do what they can, especially in the first half of games.

The defense hasn’t been awesome, and I’m not trying to make excuses for them, but OSU is a team built on offense who asks the defense to do enough to help them win. Right now, they’re doing they’re best, but it’s not enough to make up for the other side of the ball that’s not doing theirs.


I don’t want to be the guy that calls for Dru Brown. For one thing, there’s a chance he’s actually injured right now. I am on the “let Spencer figure this out” train.

Honestly, through three quarters, I thought he was playing a much better game. I thought he looked improved over what we saw against Texas Tech, Kansas State, and Texas. But then, when things started going bad, he reverted back to his bad habits.

It’s obvious the defense isn’t going to force a lot of turnovers. Fine. Whatever. But you can’t keep turning the ball over yourself. And by “yourself,” I mean Sanders.

Through seven games, the freshman is responsible for 14 of OSU’s 16 turnovers. That’s nine interceptions and five fumbles. Interceptions happen. He’s got some bad ones, but they happen. The fumbles however? Those are a REAL problem. Sanders’ lack of ball security is a problem, and one that doesn’t seem to be getting better.

As fans, we suffered through a really frustrating 7-6 season last year so that Sanders could get ready. Are we supposed to struggle through another 6-win regular season for him to take the leap next year? I know that Sanders wasn’t ready to play last year. My guess is Cornelius was better in practice than Brown too. But at this point, if the only difference between Sanders and Brown is that the team is getting Sanders ready to be “the guy,” I’m happy to let him continue to do so during practice and during the offseason. I want to win some games.

Is Sanders better than Dru Brown? I think athletically yes. But will Dru Brown turn the ball over as much as Sanders? I don’t know, but if the answer is no, then it’s time to make a change, or time to adjust our expectations for the season.

Fourth Quarter: We need to talk about OSU


Before we get into discussing the state of the program, let me start with this.

Stop lumping the 2017 season in with last year and this year. I know there were a lot of expectations for that season, that weren’t lived up to. I realize that at least one of the startling trends (losing as a home favorite) started that year. But that team won 10 games. Yeah they lost one they shouldn’t have (TCU was the better team. Get over it), but goodness how unappreciative is a fanbase when you’re complaining about winning 10 games three years in a row. Changes were made after that season, so complaining like they weren’t is stupid.

Now, if you want to complain about what we’ve seen for the last season and a half? Please feel free.

If you want to look at the 20 games that Oklahoma State has played since the start of the 2018 season and create a negative view of the state of the program? Go ahead.

This is not the Cowboy team we know. It’s a team that doesn’t do the little things well. It’s a team that is losing to opponents that it is more talented than. It’s a program that’s no longer the second best in the Big 12, and it’s not even close.

Now all that said, I’m not on the #FireGundy team. I’m not here for you “fire everybody” takes. But that doesn’t mean that changes don’t need to be made.

I get Gundy’s deal with not wanting to make changes to the coaching staff. Firing sucks. Hiring is hard. But the good ones do it. Hell, Saban basically has to replace everyone every year. There are weak spots on this team, especially when it comes to recruiting. You may not like bringing in the younger guys who leave after a couple of seasons for a better job or promotion, but those go-getters are good on the recruiting trail, because they have to be. Those guys are working hard because they want to move up. Consistency is a good thing, but only if you’re getting consistently good results. Right now, the Cowboys aren’t.

I don’t know what needs to change; some coaches, an overall philosophy, players at certain positions. Maybe all of the above. But something has to, because through 20 games, things aren’t trending in the right direction.