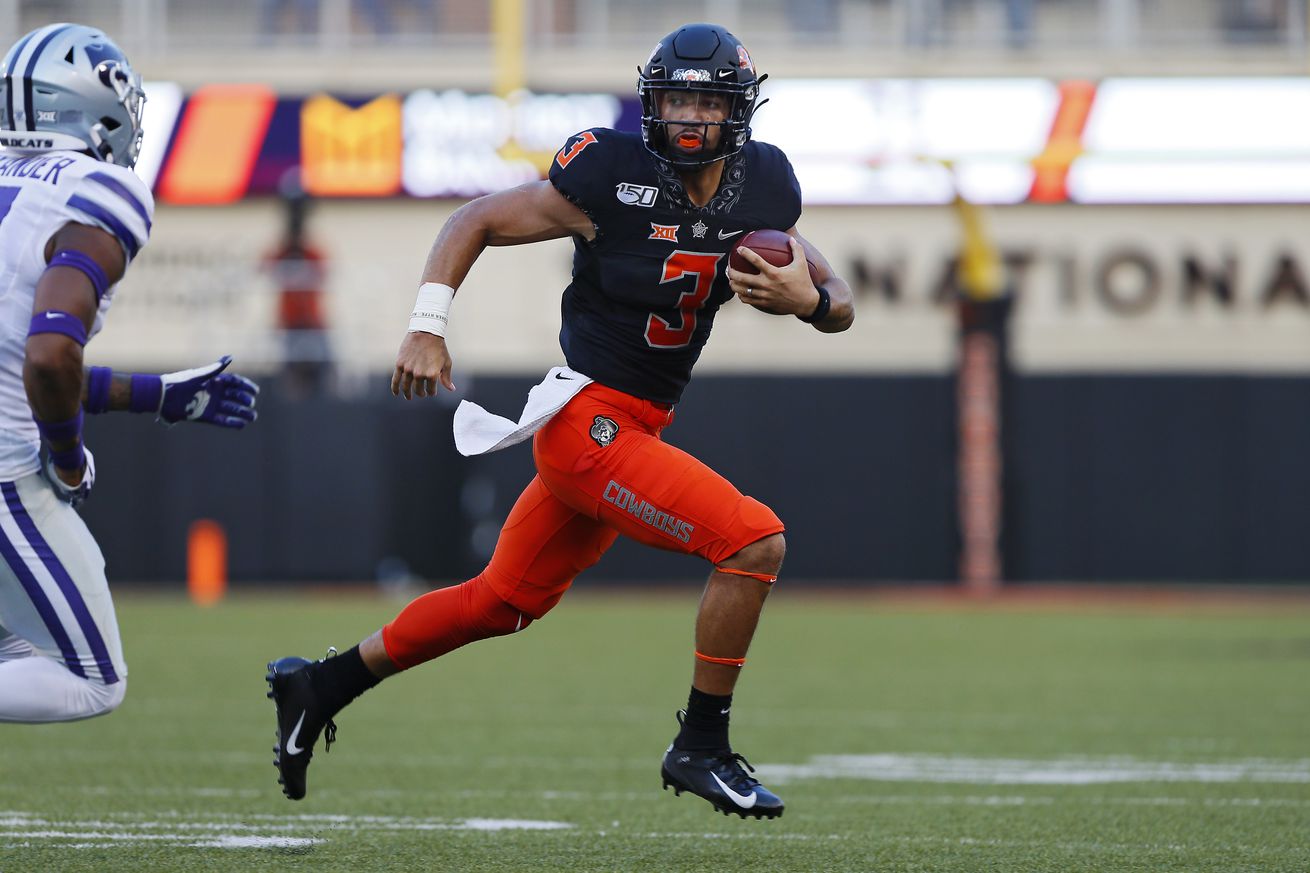 Photo by Brian Bahr/Getty Images
Welcome to High Noon Highlights, a place to catch up on everything you missed in Oklahoma State Athletics and beyond.

An in-control Sanders could be dangerous:

Spencer Sanders doesn’t want his coach to get any grief for starting him this season. He’s ready to get started and prove himself as the leader for this Cowboy team. If he keeps his eye on the prize and stays true the player he is, it could be dangerous for Oklahoma State’s opponents.


“I was so big on getting the big play and stuff like that because I was young,” Sanders said. “I wanted to go deep. I wanted a touchdown. I wanted to score. Now I’m more about patience, timing, get the first down. If I have a shot, I take the shot. But I’ll take the first down five times before I take that shot.”

First downs should be easy to come by given Oklahoma State’s skill talent riches.

Hubbard and Wallace give the Cowboys a pair of All-American pace setters, but there are plenty of other players to distribute the ball to. Dillon Stoner emerged as WR1 in Wallace’s absence, averaging 91.5 yards per game over the Cowboys’ final four regular season games. Junior Braydon Johnson averaged 22.6 yards per catch last season, which led the Big 12. Former walk on Landon Wolf showed to be a dangerous slot threat with 25 catches, and the Cowboys added a pair of impact transfers in Dee Anderson from LSU and Davontavean Martin from Washington State. {24/7 Sports}
​
Tay Martin expected to play a big part Saturday:

Washington State transfer Tay Martin is expected to have an opportunity that most wide receivers at Oklahoma State don’t normally see. He is likely going to get some significant playing time in Saturdays game against Tulsa. He comes from being coached by the air raid master Mike Leach which is helping him adjust at OSU.


Martin comes to Stillwater from Washington State and was coached by air raid connoisseur Mike Leach..

“Well actually Leach built his offense off ours, but either way the terminology is relatively similar and so it did help him in his adjustment to Oklahoma State,” Gundy said.

Martin just had to learn the different smaller tweaks in the style.

“I think that helped him a lot, running the spread and everything, airing the ball out,” Wallace said. “Having that experience behind him is definitely going to help him in the way we run our offense for sure.” {O’Colly}
​
Tylan Wallace praises Brennan Presley:

Oklahoma State captain Tylan Wallace showed high praise for his fellow wide receiver Brennan Presley. Wallace said that Presley reminds him of himself as a freshman. The scary part? but better.

"He reminds me a lot of me when was I was a freshman, but even better"

A prayer for Tech’s defense