gundysburner said:
Times were pretty damn good for a lot of people pre-COVID, regardless of his Tweets.
Click to expand...
2019 when we had the highest deficit in 7 years. Also had the longest government shutdown in history for no gain. Also had the lowest happiness score since 2012 according to the UN.

Things were absolutely good. They had also been good for the 7 years before that too. But we were also struggling with a huge addiction outbreak across the US that seems to have driven the bad happiness. Also I think social media is negatively affecting peoples happiness more.

Also consumer confidence in 2019 was about what it was in 2015 even dipping down below 2015. So no major changes in the last 4 years. It has been consistently high that whole time. Again all good. Just not radically better recently than a few years back.

HacklemanPoke said:
In 1999-2000 the State of OK spent $739MM on higher ed. In the latest budget we plan to spend $770MM.
Click to expand...
But I understand that oil and gas revenues are dropping now. If Biden gets in and does what he promised to stop fracking and phase out fossil fuels it will badly hurt Oklahoma tax revenues

Click to expand...
How is this possible? Biden is already handing out jobs to the bern and warren

Rack said:
I assume you live in the Boston MA area (987)...I have no idea on your areas except for it's nearly always a Dem voting block.

However, I have a nephew in his late 30's in Portland who has never voted but is so sick of what is going on that he's highly motivated...I can't imagine people in Minneapolis wouldn't be motivated and pissed off about rioters burning down some downtown areas. Same with Michigan and Pennsylvania with what has been going on in Philly in the past week. That doesn't even mention those who are pissed off about their businesses being shuttered by the authorities due to Covid.
Click to expand...
Imagine being a liberal living in a Rep voting block...

okstate987 said:
Incorrect. Nate Silver is arguably the most accurate pollster since the late 2000's from a statistical standpoint. Do you really think some rando on twitter is more accurate?

PF5 said:
there's no place like home...
View attachment 86738
Click to expand...
One of two things will happen here.

Trump wins and the "polls are lying but random twitter bot I follow" people are going to totally feel smart about this.

Biden wins and the polls work. The same people will say there was fraud and dead people voted or something stupid like that.

I say actions speak louder than words. The biggest action today was Trump is going low key party for Tuesday. I have no idea how this plays out but him downplaying this is telling.

More hot takes from random people on twitter. Warp drives and fusion power will be invented before you post something of substance.
Last edited: Oct 31, 2020

More hot takes from random people om twitter. Warp drives and fusion power will be invented before you post something of substance.
Click to expand...
Doesn't appear to be a "random person on twitter" to me. 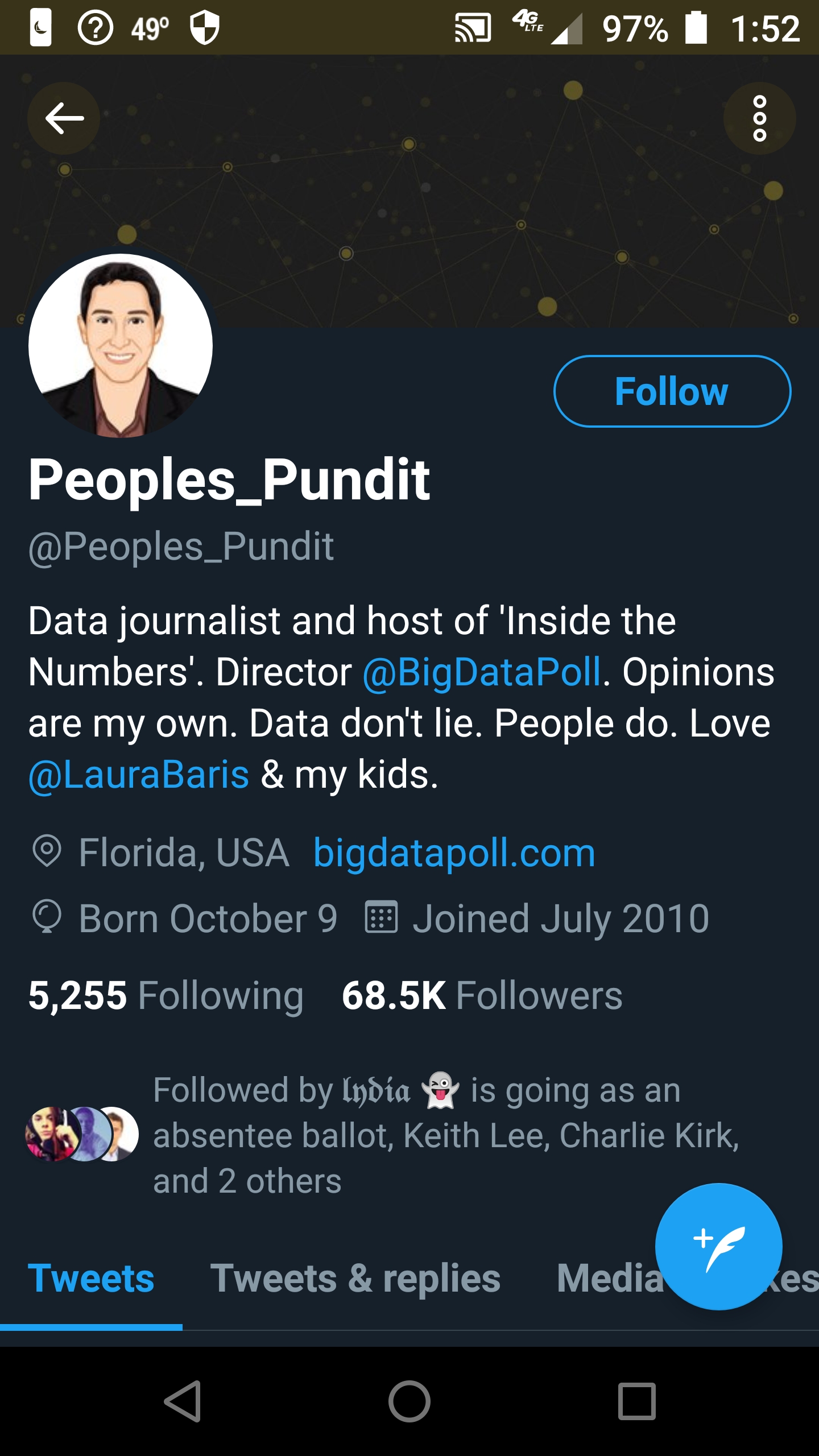 wrenhal said:
Doesn't appear to be a "random person on twitter" to me.

Sent from my Moto Z (2) using Tapatalk
Click to expand...
Well, do you see his or anyone else's names? None of that information is listed on their website:

They also don't even have dates on their blog entries, and are interviewing with the Epoch Times....lol. Within the last 8 blog entries, posts about the 2018 election are posted, so he really doesn't appear to be doing much for the 2020 election. That is very bizarre for the "most accurate pollster" to do.

Finally, lets take a look at the People's Pundit website, which appears to be his most active one. On the main page, the top videos on the right hand side are the following :

This just screams lack of bias and factual reporting, doesn't it?

Let's look at 538's poll ratings which are based on how accurate they are. Keep in mind, Rasumussen, which is a right leaning organization has an A grade. They are biased, but do high quality work. On the other hand, Big Data Poll has only called 25% of the races correctly and earned an F. Are you and @pokes16 really going to hang your hat on this rando and his "work"?

Anyone can self-claim that they are awesome and accurate without any outside sources, it literally means nothing. This is a crisis in right wing media, where people with blogs have taken over the bulk of it and push pure fabrications.

So again, warp drives and fusion power will be invented before @pokes16 posts something of substance.
Last edited: Oct 31, 2020

Even the neutered Mika is figuring it out

Coweta, I work in Broken Arrow

Rack said:
Things Trump actively wants to conserve:
1. Law and order
2. Our boarders and enhanced entrance policies
3. Life of the unborn
4. State and local control of issues like Covid 19 response
5. Originalist Justices who aren't suppose to re-write law
6. The reduction of taxes on working Americans
7. American jobs over international jobs
8. Nationalism over internationalism
9. Military strength and the peace achieved through it
10. Not meddling in foreign affairs with our military unless absolutely necessary (I realize this can be argued as both liberal or conservative)

Certainly I understand he wasn't conservative in the past, but he has nearly fully embraced conservatism politically in the past five years. Prior to that I would 100% agree that he wasn't a conservative and fiscally he hasn't been conservative so far as the debt continues to rise. My issue could be that I define conservatism by Ronald Reagan not George HW Bush (outsider vs insider, anti establishment vs establishment as we call it today) and those two were quite different in terms of their governance, while both were not conservative in their internationalism. My biggest issue with HW was his use of the term "New World Order," we certainly don't see Trump using that heinous term.

Things Trump actively wants to liberate:
1. Coal miners
2. Restrictions on American businesses
3. Unborn citizens
4. The internet
5. Gun owners
6. States
7. The United States from bad trade deals
8. His hair and his tanning bed
9. His mouth on twitter
10. The conservative press
Click to expand...
Your two lists are right on. I can not think of anything to add (in the past 2 minutes)
3

Biden/Harris event called off after Trump supporters harassed the bus on the road. There is a group of vehicles following the bus around that are apparently armed too.

So we have armed right wing "guards" at polling places and now they are harassing and following candidates around the US.
3

docpoke said:
Your two lists are right on. I can not think of anything to add (in the past 2 minutes)
Click to expand...
Better add electricity to the things Biden is going to take away.

This is a quote from Trump's Wisconsin Rally.

"There will be no heating in the winter, no air conditioning in the summer, and no electricity whenever the hell you want it," Trump claimed

KAG y'all, we have to fight the democrats so they don't take away our heat in the winter!

Signed,
The party that has lost all touch with reality
J

311Cowboy said:
Better add electricity to the things Biden is going to take away.

This is a quote from Trump's Wisconsin Rally.

"There will be no heating in the winter, no air conditioning in the summer, and no electricity whenever the hell you want it," Trump claimed

KAG y'all, we have to fight the democrats so they don't take away our heat in the winter!

Signed,
The party that has lost all touch with reality
Click to expand...
Those things will certainly be more expensive.

Signed,
AOC and supporters of the Green New Deal