Oh the Irony, I can't stop laughin and you can't make this stuff up.

Been all in supporting democrats and blocking conservative content now worrying about how to save his company if the democrats get elected. Though he still may be dumb enough to think if it's a different democrat the outcome will be different. This is pure gold.

Zuckerberg says if Warren becomes president, Facebook would sue U.S. gov't: 'You go to the mat and fight'
By Chris Ciaccia | Fox News

Fox News Flash top headlines for Oct. 1
Fox News Flash top headlines for Oct. 1 are here. Check out what's clicking on Foxnews.com
Leaked audio comments from Facebook CEO Mark Zuckerberg include him saying that the tech company would likely have no choice but to sue the U.S. government to stave off being broken up if Elizabeth Warren becomes president.
The comments, obtained by The Verge, span a wide range of topics and deep insight into Zuckerberg's thinking, going much further than the usually stoic CEO appears in public.
"You have someone like Elizabeth Warren thinks that the right answer is to break up the companies … I mean, if she gets elected president then I would bet that we will have a legal challenge, and I would bet that we will win the legal challenge," Zuckerberg is quoted as saying in two Q&A sessions with Facebook employees during July.
"And does that still suck for us? Yeah. I mean, I don’t want to have a major lawsuit against our own government. I mean, that’s not the position that you want to be in when you’re, you know, I mean … It’s like, we care about our country, and want to work with our government and do good things. But look, at the end of the day, if someone’s going to try to threaten something that existential, you go to the mat and fight." 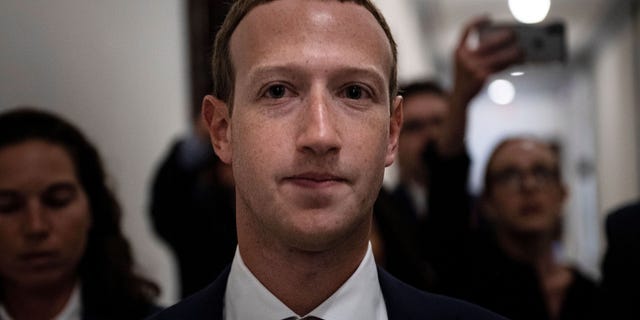 Zuckerberg walks to meetings for technology regulations and social media issues on Sept. 19, 2019, in Capitol Hill, Washington, D.C. (BRENDAN SMIALOWSKI/AFP/Getty Images)
FACEBOOK CEO ZUCKERBERG MEETS WITH TRUMP, KEY SENATORS ON DC SWING
Zuckerberg, who met with President Trump and several D.C. lawmakers last month, also said that the company's size has helped it fight election interference while noting that its rival, Twitter, has been inadequate at fighting interference because of fewer resources.
“It’s why Twitter can’t do as good of a job as we can,” Zuckerberg said. “I mean, they face, qualitatively, the same types of issues. But they can’t put in the investment. Our investment on safety is bigger than the whole revenue of their company.”
The 35-year-old tech titan publicly acknowledged on Tuesday that the comments were indeed his, saying that he often shares "openly what I'm thinking on all kinds of projects and issues."
"The transcript from one of my Q&As a few months ago just got published online -- and even though it was meant to be internal rather than public, now that it's out there, you can check it out if you're interested in seeing an unfiltered version of what I'm thinking and telling employees on a bunch of topics like social responsibility, breaking up tech companies, Libra, neural computing interfaces, and doing the right thing over the long term," Zuckerberg wrote on Facebook.

Warren responded to the story, tweeting that the system that allows "giant companies like Facebook engage in illegal anticompetitive practices" needs to be fixed.

A Facebook spokesperson described the D.C. meetings as "good" and "constructive," aimed at "meeting with policymakers to hear their concerns and talk about future Internet regulation." Trump also tweeted an image last month of himself shaking hands with Zuckerberg at the White House.

In March, Elizabeth Warren, a Democratic Senator from Massachusetts, put forth a plan that would break up the largest tech companies in the country, chiefly Facebook, Amazon, Google and Apple, saying the power they hold is too great.
"I want a government that makes sure everybody — even the biggest and most powerful companies in America — plays by the rules," Warren wrote in a blog post announcing her plan. "And I want to make sure that the next generation of great American tech companies can flourish. To do that, we need to stop this generation of big tech companies from throwing around their political power to shape the rules in their favor and throwing around their economic power to snuff out or buy up every potential competitor."
ZUCKERBERG SAYS THERE 'CLEARLY WAS BIAS' IN CONTROVERSY OVER 'CENSORSHIP' OF PRO-LIFE GROUP LIVE ACTION
In her plan, Warren specifically mentioned that she wants to unwind Facebook's acquisitions of Instagram and WhatsApp, an idea that has gained traction on both sides of the political aisle.
During his meetings with D.C. lawmakers, Zuckerberg met with Sen. Josh Hawley, R-Mo., who has proposed a bill to ban features that enable limitless scrolling, autoplay and other addictive features on social media. Hawley said on Twitter that he asked the Facebook founder to show he was "serious about bias, privacy & competition" and sell WhatsApp and Instagram as well as submit to a third-party audit on censorship.
"He said no to both," Hawley tweeted.

Sen. Hawley has also announced legislation that would remove tech titans’ protection from liability for third-party content on their platforms. Under the Ending Internet Censorship Act, these companies are able to "retain Section 230 protections if they prove they are politically neutral to a third-party auditor," a Hawley spokesperson told Fox News.
Zuckerberg's visit to Washington came amid a fraught period for Facebook, with lawmakers calling for closer scrutiny of the company amid privacy and censorship bias concerns. Facebook currently faces an anti-trust probe led by state attorneys general as well as a separate antitrust investigation by the Federal Trade Commission (FTC).
That agency slapped Facebook with a $5 billion fine over the company’s privacy policies, and the company agreed to enact new oversight on how the company utilizes user data.
G

Yes, how dare I develop & app & sell it off to FB!! How completely evil!

When the vultures cannibalize themselves. However, Zuck is too young to realize that leftist governments favor rich leftists, while pandering and posturing to satisfy their masses.

This violent talk offends me.

It’s pretty funny and I still don’t think they quite understand the situation they’ve created for themselves.

llcoolw said:
It’s pretty funny and I still don’t think they quite understand the situation they’ve created for themselves.
Click to expand...
Not at all, they will still continue to pander to the left. Heck Warren is one of the milder ones in the field.

Why aren't people having conniptions to condemn this violent rhetoric?

Sent from my SM-G955U using Tapatalk

RxCowboy said:
Why aren't people having conniptions to condemn this violent rhetoric?

Sent from my SM-G955U using Tapatalk
Click to expand...
Nobody assumed it's gender so there is nothing to be outraged over.

RxCowboy said:
This violent talk offends me.
Click to expand...

Here's an emotional comfort doll for you. Snowflake.

Here's an emotional comfort doll for you. Snowflake.

Click to expand...
Thank you! I can stop the Zoloft now!

Sent from my SM-G955U using Tapatalk

RxCowboy said:
Thank you! I can stop the Zoloft now!

Sent from my SM-G955U using Tapatalk
Click to expand...
Great for an old fat man. I looked for a Christina Hendricks doll for you but had to settle for a French maid.

bleedinorange said:
RxCowboy said:
Thank you! I can stop the Zoloft now!

Sent from my SM-G955U using Tapatalk
Click to expand...
Great for an old fat man. I looked for a Christina Hendricks doll for you but had to settle for a French maid.
Click to expand...
Japanese maid just doesn't have the right ring to it.

wrenhal said:
Japanese maid just doesn't have the right ring to it.