Berry Tramel recently did his Big 12-only efficiency rankings, and the results do not paint a pretty picture for Oklahoma State. Sixth in defense, worse on offense and Oklahoma is having an all-time year.

I come bearing more bad news. It doesn’t get any prettier when you look at points per drive across the entire season. Berry’s methodology is simple and good. I think PPD is probably better because it doesn’t include FCS games and doesn’t include garbage time scores (although I wish I could go Big 12 only).

Anyway, here’s where OSU ranks in the Big 12 with an eye on past OSU teams.

It’s tough to call this the 38th-best offense in the country, isn’t it (although S&P+ calls it the ninth-best!)? There have been moments, sure, but it hasn’t much looked like a top-75 offense for most of the last few weeks. Related: Depending on how this weekend goes, TCU, Kansas State and others could eventually pass these Pokes.

So how does it stack up compared to recent seasons? Well, things aren’t quite 2014 bad yet (remember that Texas game at home??), but they’re as bad as they’ve been since then. 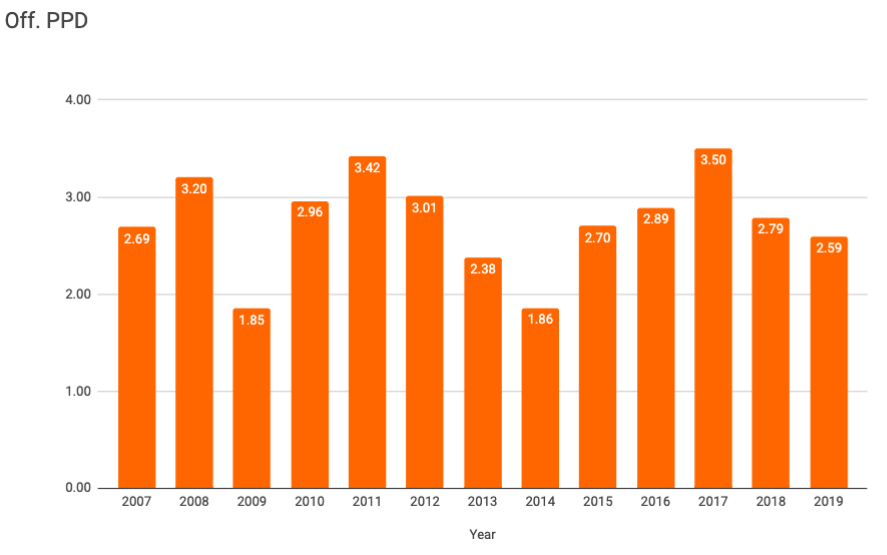 If the season ended today, this would be the least efficient offense since 2014 and one of the least efficient in the last decade-plus. One startling thing to me is how inefficient that 2013 offense was. That team almost won the Big 12 title! That’s what you’re afforded, I suppose, when you have the best defense in school history.

Speaking of defense, here’s how this one ranks among the Big 12.

Whoo boy that is bad. It means OSU is flirting with a negative net points per drive number, which has only happened one time since 2007 (OSU was -.4 PPD in 2014).

It is the second-most inefficient defense for OSU since 2007. Jim Knowles also coached the other one last year when OSU gave up a hearty 2.55 points per drive. Both of these defenses (last year and this year) are more inefficient than any of the previous 10. 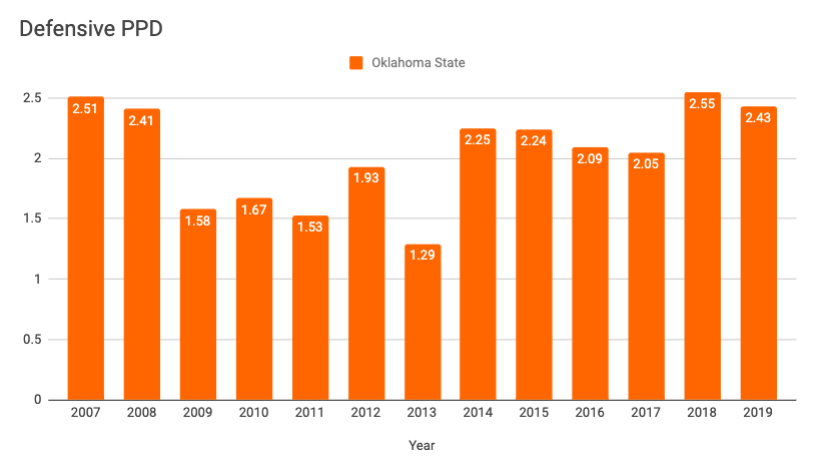 There’s obviously still room to improve here, but the numbers thus far — like I noted off the top — do not paint a very pretty picture.