PFB - Big 12 Superlatives: Which QB is the Most Talented, Which Has the Most to Prove?

As the quarterback goes, so goes the team. That’s the case throughout most of college football, but especially in the Big 12.

When (and if) we get college football this fall, the conference should be just as strong as ever behind center. In the meantime, let’s hand out some honors to the league’s top QBs.


Sam Ehlinger returns as the Big 12’s most established starting QB. Whether or not you believe Texas is actually “back” is debatable ([COLOR=var(--color-text)]when were they there, again?), but however far the Longhorns go, Ehlinger will deserve a lot of the credit. [/COLOR]

Ehlinger makes up for his less-than-elite arm talent with grit and his running ability. Plus, he’s a scoring machine. In just three seasons he’s already in the top 13 in Big 12 history in TDs responsible for. 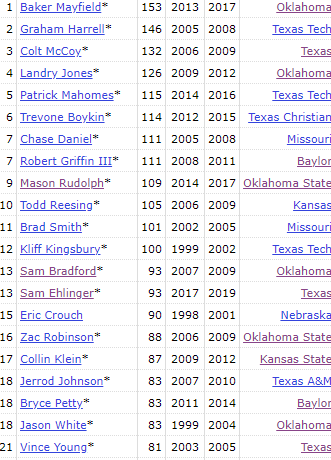 If he matches last year’s total of 39 he’d tie Colt McCoy for No. 3. [COLOR=var(--color-text)]How about 12 more scores than Vince Young in one fewer game???


Purdy’s sophomore season ended on a down note with Iowa State dropping its final two games to unranked Kansas State and Notre Dame in the Camping World Bowl. But before that all of ISU’s losses were to ranked teams (except for his three-interception outing against Oklahoma State).

Purdy can sling it with the best of them and he’s sneaky-good when he decides to tuck the ball and run. Plus, that late meltdown to the Cowboys was the exception and not the rule. Purdy’s proven to be one of the most accurate and efficient passers in the league the last few years and he’s still got room to grow.


The Big 12’s active leading passer has started 30 of the last 31 games for Baylor and currently sits third in all-time passing yards behind Robert Griffin III and Bryce Petty (he’s just 453 yards behind Petty). He was also the first Baylor QB to play for a conference title since Petty won it in 2014.

If given the time, Brewer could seal up all the program record books as the top Bears QB not named RG3, at least statistically.

But that’s just the thing. He was rarely given the time to do anything last year as the Bears’ line allowed a Big 12-worst 38 sacks. It was a couple of hard hits, including a sack that saw his helmet bounce off the turf, that took Brewer out of the Big 12 title game the Bears would lose to OU in overtime.

Most Upside (and Biggest Shoes to Fill): Spencer Rattler (Oklahoma)


Lincoln Riley turned three transfers (Baker Mayfield, Kyler Murray and Jalen Hurts) into two Heisman winners and a runner-up. His next QB came out of high school as the highest-ranked recruit of the bunch. The rich get richer.

Winning the Big 12 title has been the norm at Oklahoma for some time and sending quarterbacks to New York in search of hardware has been the norm for Riley during his tenure. This will be the first time he’s had to attempt either with a freshman, but count him out at your own risk.


All the upside and all the angst. Spencer Sanders had his ups and downs during his first year at the helm of OSU’s offense, but he was trending in the right direction before injury effectively ended his freshman season.

Now, with Chuba Hubbard and Tylan Wallace sticking around for another year, he’s got the weapons and talent to hang with any team in the league. The biggest question will be just how big of a leap OSU’s franchise QB can take in Year 2.

The Cowboys are riding as much hype into an otherwise uncertain 2020 season as they have since 2017 when Mason Rudolph and James Washington decided to give one last go. We’ll see if Sanders and Co. can live up to it.


Bowman had an exciting start to his college career, knocking off ranked teams on the road (looking at you, Oklahoma State) and going toe-to-toe with Kyler Murray. He was getting mentioned in probably too many conversations with Patrick Mahomes before he was sidelined twice with injury as a freshman. A year later a shoulder injury held him to just three games and a redshirt.

Bowman may be one of the most talented passers in the league but a he’s yet to play more than three consecutive conference games. If he can get over the injury hurdle, look out, Big 12.


Somehow we are entering just Year 4 of the Skylar Thompson era in Manhattan. It seems like Year 6, but that might be just because he started off his career 2-0 against OSU.

The longtime Wildcat turned in career numbers in passing yards and TDs in 2019, the first year post-Bill Snyder, leading K-State to eight wins. We’ll see if he can cap his college career by once again out-performing expectations.

The post Big 12 Superlatives: Which QB is the Most Talented, Which Has the Most to Prove? appeared first on Pistols Firing.