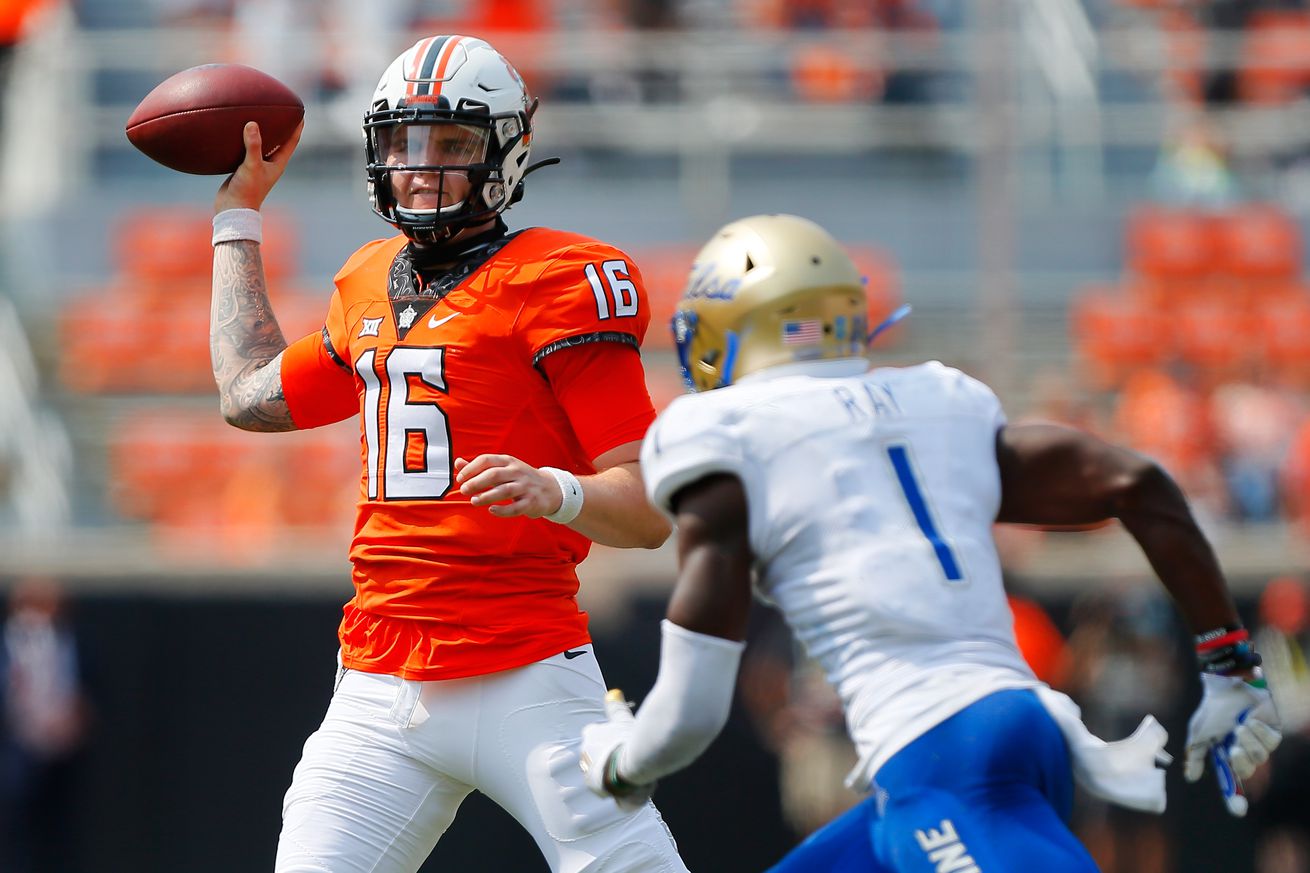 Photo by Brian Bahr/Getty Images
The Cowboys have injury questions at quarterback and on their offensive line.

No. 15 Oklahoma State will try to win its first Big 12 conference opener since 2015 when the Cowboys host West Virginia on Saturday at Boone Pickens Stadium in Stillwater.

The quarterback situation is unknown for OSU heading into the game after starter Spencer Sanders exited the Cowboys’ 16-7 season-opening win against Tulsa last week with a right ankle injury. He was in a walking boot for the first half of the week, but there’s been no update on his status for Saturday.

True freshman Shane Illingworth looks to be OSU’s backup option after he was 4 of 5 for 74 yards in just a quarter of work in relief for junior college transfer Ethan Bullock, who was 8 of 13 for 41 yards and threw one interception. WVU coach Neal Brown said earlier this week he’s reviewed Illingworth’s high school tape to help the Mountaineers prepare for the former four-star recruit. Illingworth threw for 3,081 yards and 44 touchdowns at Norco (California) High last fall.

The Cowboys also have injury questions on their offensive line with starting right guard Cole Birmingham and right tackle Hunter Anthony, both of whom exited the Tulsa game with lower-body injuries. Gundy characterized Birmingham’s injury as a “little more serious” than Sanders, but not much was said about Anthony. With those two out, OSU turned to Jake Springfield (left tackle), Josh Sills (left guard), Ry Schneider (center), Hunter Woodard (right guard) and Teven Jenkins (right tackle) up front against Tulsa. The Cowboys’ O-line was a big question mark heading into the season and is even more so now.

OSU had trouble moving the ball down the field against the Golden Hurricane. Junior running back and Heisman Trophy hopeful Chuba Hubbard, who led the nation last year with 1,936 yards, only managed 93 yards on 27 carries and one touchdown. Backup LD Brown was a surprise with 63 yards on nine touches. Hubbard rushed for 106 yards on 26 carriers and had seven receptions for 88 yards against WVU last year.

The Cowboys’ defense stopped Tulsa on all 12 third down plays and yielded only 278 total yards. Linebacker Malcolm Rodriguez led the way with 10 tackles (nine solo), two tackles for loss and one sack. Safety Kolby Harvell-Peel also had an interception with seven seconds remaining in the game.

Alex Hale had no issues in his first start at kicker, going 3 of 3 on field goals with a long of 40 and making his only point-after-attempt. Tom Hutton got a workout in with five punts for 209 yards, including a long of 45.


The Mountaineers looked sharp in their 56-10 win against FCS opponent Eastern Kentucky two weeks ago. WVU had a balanced attack with 624 yards almost an even split with 329 rushing yards and 295 passing yards. Jarret Doege threw for 228 yards and three touchdowns in the first half, while Alec Sinkfield ran for 123 yards and two scores on 15 touches.

WVU’s defense is led by the Stills brothers, Darius Stills and Dante Stills, who combined for 26 tackles for loss and 14 sacks last year. Darius, the older brother, was voted the preseason Big 12 Defensive Player of the Year. The Cowboys’ offensive line struggles don’t bode well for the matchup in the trenches against the Stills brothers.

With their only game against a FCS opponent, it’s hard to judge how good the Mountaineers’ performance was.


OSU will honor its all-time leading rusher Thurman Thomas during halftime as the inaugural member of the program’s Ring of Honor. The Cowboys will also wear 1987 Sun Bowl throwback uniforms for the occasion.