Why no Ferraris or Jersey Robb?

crimsonhater said:
Why no Ferraris or Jersey Robb?
Click to expand...
No one knows and they ain’t sayin.

So Braydon Thompson, a HS Jr and OSU Commit for the Class of 23 was the big talk of the tournament OSU wise. Because he had already qualified for U20 World Team Trials, he put it on the line against grown ass men in the Senior division and finished 6th. He is a top 25 overall guy in Class of 23 (and probably rising) and top at his weight class (170), but projects a little bigger in college (here he wrestled at what is 174.).

Jordan Oliver had himself a tournament as usual, and lost a close one to Alex Pantaleo, the 1 seed in a really close one. Jordan Williams looked about like we expect and he won a wild one with some great par terre defense in his 3rd place match for U20.

Dieringer was as disappointing as you can be (which isnt very) with 4 pins and a tech fall, only losing a TIGHT one to Vincenzo Joseph.

What does this mean for our Senior Guys? The Open is the second to last chance for most of them to qualify for the World Team Trials Challenge Tournament to try to make the World Team. We might see one or two of our guys at the last chance tournament in a couple of weeks. You qualify by finishing in the top 7, or having already qualified, so here is who is eligible now:

And Daton Fix sitting at Final X waiting. Should be good stuff!
Last edited: May 2, 2022

Probably won't see Carter. Don't think they want him cutting weight. Will probably see him at U23s at 65kg.

The Cowboy Wrestling Club (our RTC) is hosting a tailgate for Final X as well from 11am-2pm in the Hall of Fame parking lot.

SOOOOO, Life happens and I am sadly going to have to miss Final X (cry emoji). I have a free GA ticket for someone if they want to go ($50 value!).

OK, so the World Team Trials Challenge Tournament is this weekend (starts 10 am CST Saturday on Flo). For a refresher (if you don't want to read above) the winner of the WTT moves on to Final X IF someone is already waiting there for them because they were awesome at last year's Olympics or World Tournament. What is Final X? It's a wrestle-off to see who makes the US world team and competes for a world title later this summer.

Anyway, here are the future, current and former Pokes still in play for the world team if they win WTT (or make the finals if someone isn't already waiting in Final X at their weight)

I've got a killer weekend, especially with trying to keep up with the Cowgirls, but I'll try to keep y'all updated.

(3) Jordan Oliver - 70 kg
Quarters: Beats (6) Michael Blockhus 4-2. Too Much defense by Oliver for Blockhus to come back after being down 4-1.
Semis: Beat (2) Ryan Deakin 7-4 to make the finals.
Finals: Will face (4) Zain Retherford at Final X in Stillwater!

(3) Alex Dieringer - 79 Kg
Quarters: Dominates (6) Isaiah Martinez 14-3 tech fall. Started out close, then Ringer put it on.
Semis: Lost 3-2 to (2) Vincenzo Joseph giving up a takedown with 5 seconds left. Ringer had several chances, but Joseph had some good defense.
Consi Semis: Lost 5-1 to (4) Carter Starocci
OUT

First round went pretty close according to seeds for the Pokes, except Derek White upset Kyven Gadsen. Carter Young was 2 and out, which was a little disappointing since he was really in both matches. Heil gets a tough draw in Consolations with one seed Maple being upset in his first match by Evan Henderson.

Some great news with Jordan Oliver making the finals, which since three isn't anyone waiting at Final X at his weight means the finals will be wrestled in Stillwater. 2 out of 5 Freestyle weights will feature POKES!

We won’t get to see Chance in Stillwater, but it’s good to see the young man get his life together.

I am so mad I am going to be missing this. This looks so fun. You don't understand how much firepower this is... 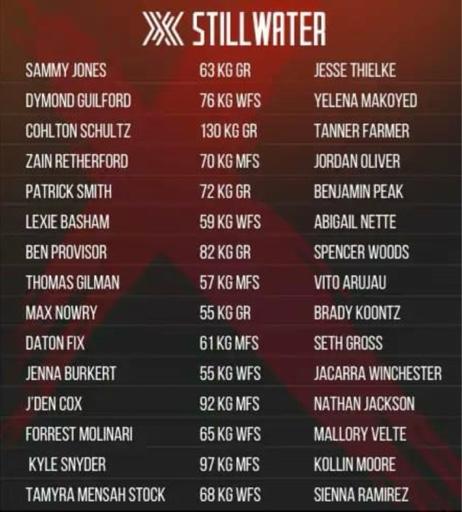 How was the crowd?

Can't believe Fix and Oliver both went down 2 matches to 1.

Fix is in a slight slump and possibly slid backwards the last couple years.
C

The crowd was small. The middle level was maybe 25% full. Daton looked off and really got pushed around. Overall it was a fun event but the two cowboys did not have the showing we wanted to see.

Shortly after Daton lost to Seth in their 2nd match Jenna Burkert’s injury took the air out of GIA. Seeing an athlete down that long reminds you that there are things worse than coming up a little short on the scoreboard.

I was extremely grateful to be there to see all those world-class wrestlers compete to represent the U.S.

So still sad that I didn't go, but disappointed in both our turnout and our Cowboys performance. have to remember these are some of the best guys in the world they are wrestling - but still hurts to finish second.

Anyway - here is the first half of the team representing the USA at Worlds! Give 'em hell Men and Ladies!

61 KG: Seth Gross. Won 2-1 over Daton Fix in about as close a series as you can get. Fix won Round 1 (5-5) on criteria. Match 2 Gross won 5-4, after Fix went up 3-0 in the first period and 4-1 in the second. Daton had his chances but he just couldn't hold him off. Some funky calls on "grounded/not grounded" on OOB calls too that could have gone either way. Match 3 Daton goes up 4-0 in first, and was up 5-4 with less than a minute. Some bang bang calls that could go either way, but went Gross' way and ends 9-5 in one that was close than the score. Tough, tough deal for Fix.

55 KG: Jacarra Winchester wins with an injury forfeit by Jenna Burkert when she landed awkwardly on her neck. Tough deal, but Burkert said yesterday she was OK.

About 2000 people in attendance. Apparently not the guy that asked for my ticket as it sadly was not used. Bayside High's AC Slater in the house. TIckets were too expensive if they want a crowd, but some amazing athletes in action. The other half of the weights are this Friday in NY. I'll post results just because I'm going to get SOMEONE interested in wrestling, lol.

I knew several people who wanted to go but had to work Friday and weren’t going to pay the high prices to only see part of it. If tickets had been 10$ I bet 5-6k would have been there.
C

Friday afternoon is just not a good time for an event like this. You are asking people to take off work. That said, I would go again. I enjoyed it, but I just cannot get into the Greco.
J

cowboyfanatic said:
I knew several people who wanted to go but had to work Friday and weren’t going to pay the high prices to only see part of it. If tickets had been 10$ I bet 5-6k would have been there.
Click to expand...
I said this a month ago and got people got on me hard.they need to realize stillwater is not that big and if they want a crowd $10-15 is what it will take.
You must log in or register to reply here.
Share: Facebook Twitter Google+ Reddit Pinterest Tumblr WhatsApp Email Link