Sugar's in Norman is closing

LA Face with an Okla. booty.

Sugar's will reopen with a new SEC-friendly theme where all the dancers will be relatives of the patrons.


‘It’s run its course’: Sugers, Norman’s only strip club, will close after over three decades of operation | Culture | oudaily.com

‘It’s run its course’: Sugers, Norman’s only strip club, will close after over three decades of operation 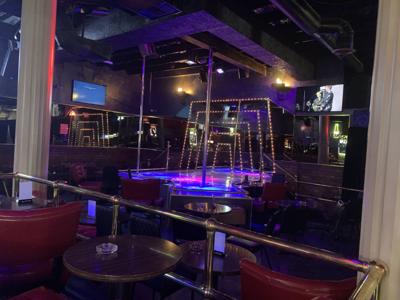 
Norman’s only strip club will entertain clubgoers for the last time July 24 after over three decades of operation on Campus Corner.
Sugers, which came under new management in September 2020, will hold its final nights as a strip club this weekend, as its owners intend to transform the club’s soon-to-be former location into a new nightlife spot, co-owner and manager Travis Case said.
Case said the new business to replace Sugers will not be a strip club.

“I think, as any business, sometimes … it’s run its course,” Case said. “For me and my two partners, we just felt it was time to bring something completely new to Campus Corner ... something that was never seen before, and we're excited to be able to have that opportunity … as soon as we close up Sugers.”
Case said messages from admirers of Sugers have poured in on social media following news of the club’s upcoming closure.
“I think there is a chapter of Sugers in Norman that was historic. You hear some people throw around the word ‘icon’ around the name and the branding of it all,” Case said. “I believe, in business and some things in life, everything's got to come to an end at some point.”

Former owner and dancer Karen Summers opened Sugers in 1984.
General manager Elizabeth Shuler said the dancers who work at Sugers didn’t express any particular feelings to her about the closure, as the nature of their work isn’t about investing time in only one club.
“It’s the adult entertainment industry. (Dancers) can literally go anywhere else in a city and dance if it's a slow night in Norman. … They put investments into their livelihood, into their bodies, and they just travel where the money is.”
Sugers’ will be open for the last time from 8 p.m. to 2 a.m. Thursday and Friday and from 7 p.m. to 2 a.m. Saturday night.
“We’ll be selling all of our merch, everything we can,” Case said. “I’m sure (closing weekend will) be sad for some. I’m sure it’ll be reminiscing for some. But, overall, I think it’ll be happy and people (will be) having a good time.”

Based on the couple times I've been, I think that already might have been the case.

Really too bad. Lost my virginity there in 2003.

Midnight Toker said:
Really too bad. Lost my virginity there in 2003.
Click to expand...
You should buy it.

Midnight Toker said:
Really too bad. Lost my virginity there in 2003.
Click to expand...
The sad part is you were born in ‘63. I think they made a movie about this.

Not a lot of interest in Norman. Maybe if they opened a male strip club.

jobob85 said:
Not a lot of interest in Norman. Maybe if they opened a male strip club.
Click to expand...
Call it Boren's.