Oklahoma State’s maneuvering of the global pandemic of COVID-19 isn’t the first time it has dealt with a pandemic during the college football season.

In 1918, then-Oklahoma A&M dealt with an even worse outbreak — the Spanish Flu, which killed an estimated 50 million people worldwide — and yet Oklahoma A&M, then in the Southwest Conference, managed to move forward with a season. (Or at least a semblance of one.)

It required flexibility. Instead of an eight-game schedule, Oklahoma A&M, then the Aggies, played only six games. They went 4-2 and finished last in the conference standings with Baylor and Arkansas at 0-2.

Let’s run through how the season happened — and how the Aggies dealt with the times.


On the same day that OSU was set to open its season on Oct. 12, 1918, down the road, OU’s previously-scheduled game against Philips that same day was postponed because of the flu pandemic. The OU-Texas game was also postponed.

That didn’t stop Oklahoma A&M from opening its season against Haskell in victorious 19-6 fashion. One day later, for the first time in the history of Oklahoma City, no Sunday services were held — and church bells were silenced — because of a closing order that temporarily shuttered them in an effort to contain the flu epidemic locally.

The Haskell game would be Oklahoma A&M’s final game of October.

Changing on the fly


On Oct. 27, 1918, Oklahoma A&M announced a five-game schedule to finish its season in response to military training guidelines released in an effort to slow the spread of the flu. The schedule was announced as follows:


Here’s a look at the press clipping I found in The Oklahoman’s archives. 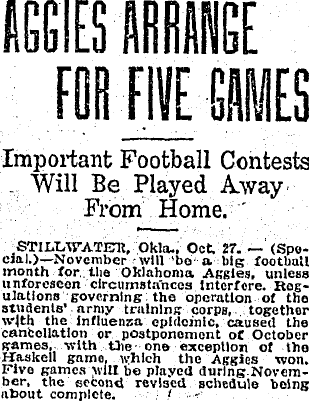 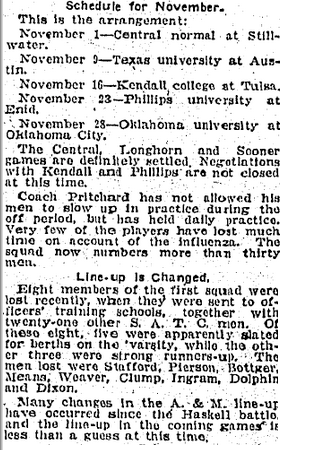 Oklahoma A&M lost eight members off its original squad to officers’ training schools. Of those, per The Oklahoman, five were slated to appear on the varsity team.


After several weeks of a layoff, Oklahoma A&M resumed its season on Nov. 2, 1918 against Central Normal — now known as Central Oklahoma (UCO). The Aggies won 26-6.


Oklahoma A&M played its first conference game Nov. 9, 1918 on the road against Texas University at Austin. The headline in The Oklahoman read: “MANY FUMBLES GIVE TEXAS GAME.” (It seems nothing has changed.)

The Aggies lost the game 27-6 on a field the newspaper described as “extremely muddy and slippery.” A day later, in Oklahoma City, churches were reopened. 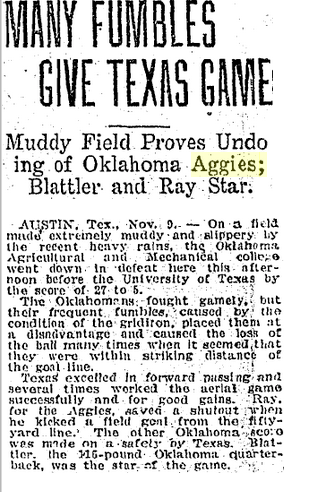 
It’s unclear why, but Oklahoma A&M and Kendall College at Tulsa — who were originally slated to play on Nov. 16 — pushed their game back one week, to Nov. 23. In the place of that, the Aggies played Wichita State on Nov. 16, winning 26-7. A week later the Aggies blew out Tulsa 33-0 to close out their nonconference slate. The game against Phillips initially scheduled for Nov. 23 was never played.


As initially planned, Bedlam on Nov. 28 in Oklahoma City took place — resulting in a 27-0 loss to the Sooners, who finished 6-0 on the season under coach Bennie Owen. OU ranked third in the nation in points per game and ranked first in defensive points allowed that season.

The win for OU was a revenge from Oklahoma A&M’s first win in the series a year prior, when the Aggies held OU to ZERO points in a 9-0 win … capping a 4-5 season that served as Earl Pritchard’s penultimate season at the helm in Stillwater.


There was no single national champion crowned in the 1918 college football season. Imagine the uproar! Instead, Michigan and Pittsburgh were both named champions.

Michigan went 5-0 that season and Pittsburgh went 4-1, losing its final game of the season 10-9 to Cleveland Naval Reserves.

The post How Oklahoma A&M Maneuvered Football During the Flu Pandemic of 1918 appeared first on Pistols Firing.