Oklahoma State is a missed Texas FG on Saturday from likely being tied for last in the Big 12 Conference going into November. Think about that for a minute.

Things as they stand aren’t much better. OSU is 1-3 in conference play, coming off a double-digit loss as a home favorite and now a double-digit dog in Ames on Saturday.

There are many reasons for this, but one of the primary reasons is because Spencer Sanders has been a walking turnover of late. OSU is currently 121st in the nation in turnovers lost (16) and 123rd in turnover margin per game (-1.3).

Surely when we look at confeOHMY GOSH LOOK AT THESE BIG 12-ONLY NUMBERS.

Oklahoma State is averaging a turnover margin one worse than the second-worst teams in the league (OU and West Virginia). Averaging!

Gundy has been preaching this for years, and now we know it’s probably the main reason Taylor Cornelius started last season. If you’re middling in talent — which OSU is and almost always has been — you can’t be undisciplined and you can’t turn it over. Last year, they did both. This year the discipline has mostly flipped but they’re turning it over at historic rates.

This is how it’s always gone with OSU. They’re 11-18 in games where they turn it over three or more times and turn the opponent over fewer than two. That includes the games against Texas Tech and Baylor this season.

Maybe this seems overly simplistic, but the data would suggest otherwise. You can track their Big 12 finish with their TO margin in Big 12-only games. 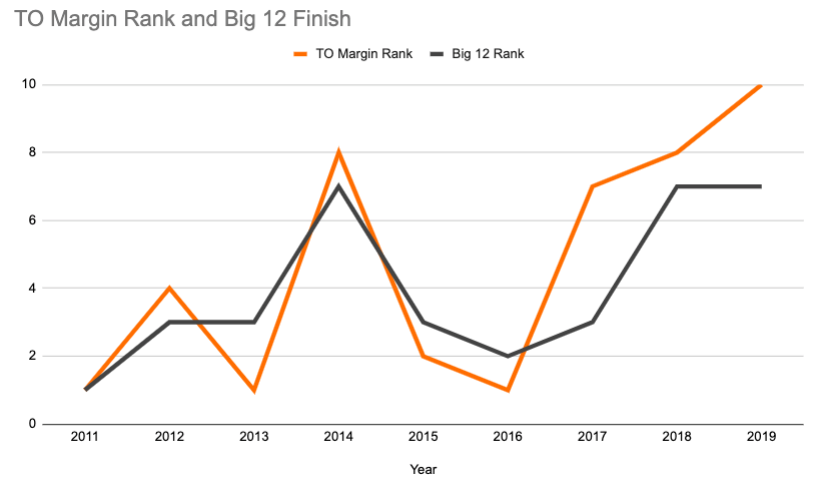 The only real outlier year came in 2017 when OSU finished seventh in TO margin but third in the league. Other than that, the numbers have always been within two of each other. If that trend stays the same — and these Pokes don’t clean up the mistakes — that will mean the bottom of the league could look like OSU-Kansas.

I’m just not sure in which order.

The post One Massive Reason OSU is Staring 4-4 In the Face This October appeared first on Pistols Firing.