The controversy that came about in the aftermath of Mike Gundy rocking an OAN T-shirt last month tracks back to one previously-unanswered question: Where did he get the shirt to begin with?

We know he wore it on a fishing trip with his sons after the photo went viral. But did he go online shopping after touting the network earlier this spring on a conference call with reporters?

As it turns out, OAN actually sent him a goodie bag which included a shirt and a hat representing the network. Matt Brown, who writes a newsletter called Extra Points, submitted Freedom of Information Act requests to get to the bottom of things, and here’s the official correspondence he uncovered in his quest to get to the truth.

It appears OAN formally reached out to Gundy to get an address for where to send gear, to which Gundy replied. 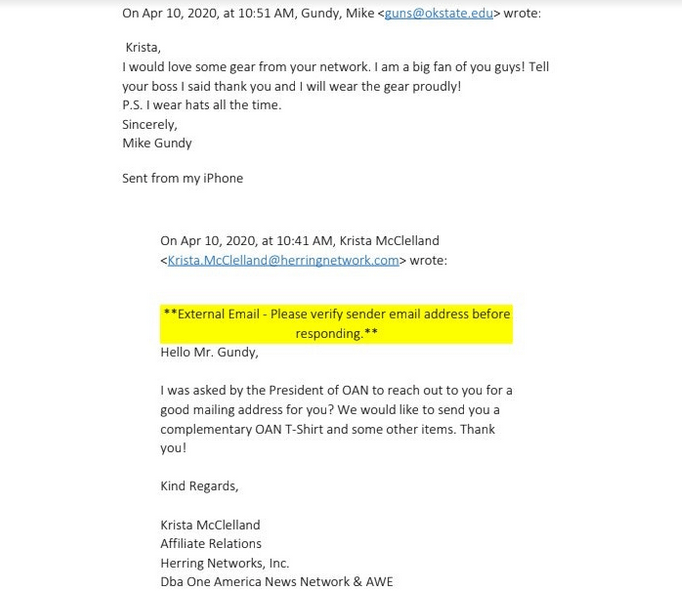 There’s some other insightful nuggets in Brown’s piece — which I won’t spoil but I encourage you to read here. The entire piece includes correspondence between OSU’s administration on how to handle the crisis, pushback from boosters and faculty about Gundy’s self-inflicted PR nightmare, and a how-the-sausage-gets-made rundown behind the scenes of OSU dealing with it all (also an appearance from Gundy’s father).

The whole piece lays out the formal timeline for how the incident played out in a matter of hours and the subsequent fallout in the days after that. None of it is particularly damning for Gundy or for OSU, but it is nonetheless insightful background that reveals what went on behind closed doors in the response to the incident — and how this became an incident to begin with.

You should know up front, though, all of it pales in comparison to the fact that Mike Gundy’s email address is guns@okstate.edu. An all-timer.

The post The Story of How Mike Gundy Came to Own (and Wear) that Infamous OAN Shirt appeared first on Pistols Firing.